This 2 hour 12 minute movie can be purchased on DVD here.

I just discovered this amazing little video and wanted to share it here as a thought provoker as more and more people are drawn toward The Nous Age and what it is. I have never felt the peace I feel while looking up, out into the Universe with my Meade telescope. It’s the greatest show on Earth!

The Creation of Man (Michelangelo)

3 Through him all things were made; without him nothing was made that has been made. 4 In him was life, and that life was the light of men. 5 The light shines in the darkness, but the darkness has not understood it. (John 1:1-5 – New International Version 1984)

I try not to quote too much scripture on this blog and will likewise keep it to a minimum as I complete my book, but I came across this quote last night and it suddenly clicked with me.

What I Believe
My core conviction, the belief that has driven me to write is that we are only part of a sea of consciousness and that “Universal Consciousness” is what we in the Abrahamic tradition have come to call God.

In the book I am using bleeding edge science mixed with, archaeologic discoveries and the occasional religious insights to make my case, so when I read the above quote it suddenly dawned on me that “the word” is consciousness!

In the beginning there was only consciousness…and that was God (1+2). That consciousness (conscious observation) creates our reality (3) as quantum physics tells us. That the light or spark inside all humans is that light of consciousness(4). And finally, that whether we acknowledge it or not (the darkness) that light of God shines in us and through us into our space-time material world!

The Source
While I don’t (and never will) rely on The Bible as factual evidence of anything I feel that there are some stories, particularly in the old testament that give incredible insight to beliefs of a long lost civilization going back perhaps 15,000 years and more.

For the most part the Old Testament and Torah, are an amalgamation of many oral traditions passed down through the eons and brought together as a single work between 600 and 400 BCE during the Babylonian Exile period. While the New Testament is a hodgepodge of information spliced together by the early Christian Church which had it’s own political agenda. And in fact, many biblical scholars question that the Gospel of John was even written by John. Perhaps the true author was someone with a much deeper understanding of the way the Universe works and camouflaged it for a future generation to discover.

A ‘Nous’ Understanding
Many new scientific discoveries are pointing toward the idea of one consciousness. A consciousness that created and continuously creates the Universe and everything in it that we experience as “reality”. Juxtapose these new discoveries with the quote from the book of John and you may suddenly realize that we are coming out of the darkness, that the veil is lifting.

I find the current world paradigm of separation repugnant.

Here in Québec there is talk again of separating from Canada, thankfully no where near a majority (30%). When Palestine was separated in 1948 it was likewise the opposite direction we should have gone, but in that case it wasn’t up to the Palestinians to decide, Western powers decided for them.

What we really need is a movement toward ONEness…Like the Global Oneness Day October 24th. 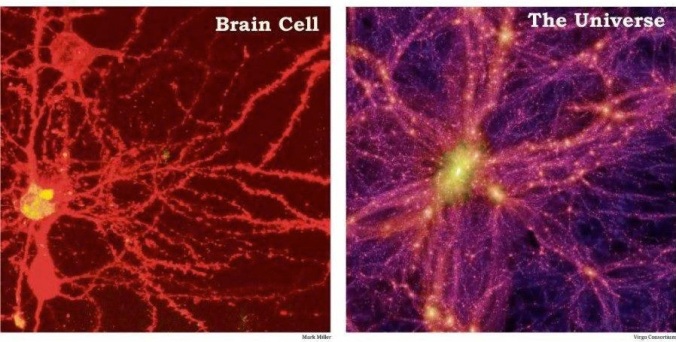 Mark Miller, a doctoral student in Brandeis University, is researching how particular types of neurones in the brain are connected to one another. By staining thin slices of a mouse’s brain, he can identify the connections visually. The image above shows the three neurone cells on the left (two red and one yellow) and their connections.

A international group of astrophysicist used a computer simulation last year to recreate how the Universe grew and evolved. The simulation image above (right) is a snapshot of the present Universe that features a large cluster of galaxies (bright yellow) surrounded by thousands of stars, galaxies and dark matter (web). (The New York Times)

One is only micrometers wide. The other is billions of light-years across. One shows neurones in a mouse brain. The other is a simulated image of the Universe. Together the suggest the surprisingly similar patterns found in vastly different natural phenomena. -DAVID CONSTANTINE

You know how your favourite song makes you feel good? It’s based on science, a science of vibration and sound.

The Universe and everything in it is held together by a symphony of sound [1]. When we harmonize WITH it we feel great…when we’re “out of tune” with it we don’t. And if you’re out of tune for too long, you can make yourself ill.

We all know that matter is made of tiny atoms, electrons spinning around nucleuses at very specific “frequencies”. Have you ever wondered how sound outside the body effects us on the inside?

I believe we have the ability to cure ourselves of disease. The Living Matrix documentary brings together some of the most brilliant minds on the subject like Bruce Lipton, Rupert Sheldrake, Lynne McTaggart, Marilyn Schlitz and others.

The version of the movie below is a bit distorted, it was improperly uploaded, but you can (like I did) purchase a copy on DVD here: The Living Matrix Movie

The Living Matrix – Film on the New Science of Healing (2010) from buzzingfly on Vimeo.

I don’t always agree with David Icke, but in this video he precisely spells out the problem that Nous Age thinking will resolve.

Well, the 2012 Olympics in London are officially over and wouldn’t you know…no new world order. The Anti-Christ didn’t win gold, silver or bronze…he never even showed up!

From the unveiling of the 2012 logo which some felt spelt out “Zion”, to the design of the one-eyed London Olympic mascots, the “rainbow riding” Wenlock and Mandeville (below), the conspiracy theories were running as rampant as competitors in Monty Python’s Silly Olympics.

Where Do We Go From Here?
With the no-show new world order at the Olympics I felt it was time to do a brief overview of the misunderstood idea of a New World Order and how the symbols, one in particular, may represent something very real delivered to us through time from an as yet unknown pre-historic people.

Novus Ordo Seclorum
Novus Ordo Seclorum is a Latin Phrase translated as “New Order of the Ages” or for conspiracy theorists, “New World Order”.  And it is usually juxtaposed with the Eye of Providence (all seeing eye of God) floating over an unfinished 4-sided pyramid.

This combination has been used on the reverse side of the Great Seal of the United States since 1782 but is most famously displayed in the wallet of every American on the back of the $1 bill (below). 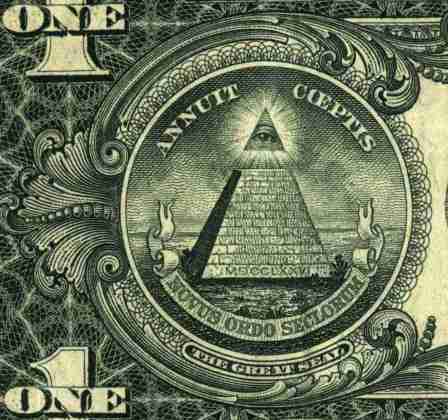 From my work in marketing I understand the power of symbols and this symbol is way more powerful than the symbols for Nike, Pepsi and The Gap combined.

So what does it mean?
The meaning of this symbol is open for interpretation and there are many. What I feel to be the most thought out interpretation comes from David Wilcock in his book The Source Field Investigations: The Hidden Science and Lost Civilizations Behind the 2012 Prophecies

David explains that “the Great Seal may reveal a time-encoded prophecy… [about a coming] Golden Age…believed to begin in 2012.” (pg. 426) (Read the full interpretation in his book.)

Masonic Connection
There’s no doubt in my mind that the symbol is clearly Masonic, used by the men who laid the foundations of the United States of America to relay a message first transmitted by a civilization which pre-dates known history. A civilization which Graham Hancock goes into at great length and detail in his book Fingerprints of the Gods: The Quest For Earth’s Lost Civilization

Personally, I’m not as convinced as David Wilcock that it’s a symbol of a coming worldwide Golden Age as I am that it’s meant to be interpreted as a personal goal or target for our own evolution to “enlightenment”. As David Wilcock eludes to, the open eye at the pyramid’s top is a clear reference to the pineal gland, which I concur is the seat of our connection to what he calls “The Source Field” and what I refer to plainly as God.

33 Degrees to Enlightenment
I will go into much greater detail in my book about this idea, but, the 33 degrees in Masonic hierarchy are a direct relation to the 33 vertebrae which start at the root chakra (Muladhara) and lead up to the pineal gland at the brow chakra (Ajna)…the following and final step leading to Samadhi or a “non-dualistic state of consciousness”. Likewise, I don’t believe that for the fictitious part of the Jesus Christ story it was a coincidence that he “died” at 33…and made his full transformation to The Light of the World.

Like the symbol of the all seeing eye, the Jesus story is meant to provoke us to our own Samadhi enlightenment. A target for our journey toward a personal new world order!

Doctors Don’t Know Everything
Doctors only know as much about the human body that can be disected from it on a physical level, but it’s the things that cannot be seen with the eyes or the edge of a scalpel that are critical to our existence here on Earth and our connection to the living Universe.

Conclusion
Symbols like we saw at the Olympics are prodding us along, tirelessly trying to wake us up to the supernatural powers we all carry inside of us. I believe we have the power to transform ourselves and in turn to change the world, guided by the symbols we are exposed to, toward what I call The Nous Age.

I BELIEVE that the scientific method is flawed. The only thing that I know for sure is that I am conscious. Consciousness is what we have first, everything after that is questionable. Bringing that one known truth into a scientific world view is where the problems begin.

This is an excerpt from the DVD Thinking Allowed. You can purchase the full DVD here.