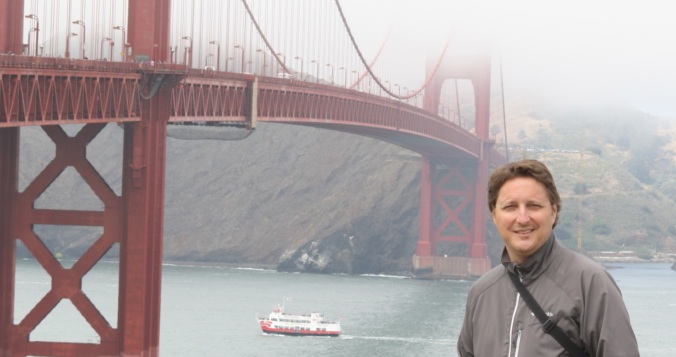 David Boullata at The Golden Gate Bridge in 2011

LAST SUNDAY IN SAN FRANCISCO the Golden Gate Bridge was celebrated on it’s 75th anniversary. Seeing it on the news brought me back to last summer when I was in The City by the Bay with my family. We walked across the chilly, sometimes foggy span, dodging (and being dodged by) other tourists on rented bicycles. The view, the wind…it was truly a memorable experience.

One of the most recognized landmarks in America, in 2007 The Golden Gate Bridge was declared one of the modern Wonders of the World by the American Society of Civil Engineers and it is…but what’s with the name, it’s not Golden!? What I discovered while trying to answer that question led me to a mysterious connection to both ancient Egyptian mythology and Christian lore

The Name
According to Wikipedia, the bridge received it’s name from the strait below it that connects the San Francisco Bay to the Pacific Ocean. It would be easy to assume that the bridge (and the strait) received their name through the Gold Rush years in California but that in fact is not true.

It was on the 1st of July 1846, 2 years before the first gold was even discovered in California,  that military officer and explorer John C. Fremont wrote in his memoirs about the entrance to San Francisco Bay, “To this Gate I gave the name of ‘Chrysopylae’, or ‘Golden Gate’; for the same reasons that the harbor of Byzantium was called Chrysoceras, or Golden Horn“.

Mirror Images
Now, mirroring old world places in the new world was nothing new (ex. New England, New York, New Rome) but I believe the new world Golden Gate has even greater significance than you may suspect, going back to biblical times and perhaps earlier than that.

This (above) is the Golden Gate in Jerusalem which looks East incidentally, as you enter the city through this gate you are moving West. This is supposedly the gate which Jesus rode through on what became known as Palm Sunday to Christians. According to Jewish tradition they are still waiting for the Messiah to arrive through this gate. The Ottoman Sultan Suleiman the Magnificent sealed off the Golden Gate in 1541…though it may have been for defensive reasons.

While attending a funeral this past Sunday and trying to locate a water fountain in the columbarium where I was I came across an icon of Jesus, on the back of a donkey riding into Jerusalem through the Golden Gate. I didn’t understand the connection until I remembered my ancient Egyptian mythology.

The Egyptian Golden Gate
Ancient Egyptians associated the East with birth and the West with death, a point of view that most certainly came from the rising and setting Sun. Upon death they believed you would pass through (see: Book of Gates)…you guessed it a Golden Gate! Which brings us right back full circle to San Francisco’s Golden Gate Bridge.

It seems that the Golden Gate Bridge is not the only place in San Franciso with an Egyptian connection!

According to Secretsinplainsight‘s video on San Francisco from the De Young Museum and the Trans America Pyramid, to Treasure Island, Angel Island and Alcatraz San Francisco has an overabundance of Egyptian symbolism.

Watch the enlightening video here and leave your comments below.