The best place to hide something is in plain sight…

THE STATUE OF LIBERTY’s full name is “Liberty Enlightening the World”. It was given to the United States by France to celebrate their alliance during the Revolutionary War. The statue was built in Paris and then shipped to the U.S. in 1885.

Various parts of the statue were on display throughout Paris as they were completed. For example Liberty’s head was exhibited in the gardens at the Tracadéro, and her torch was on display as well, as you can observe in the images below. 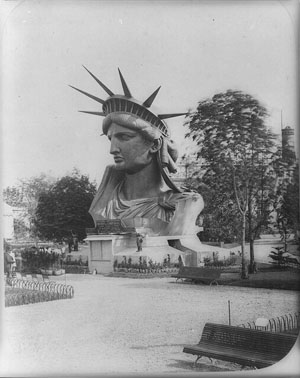 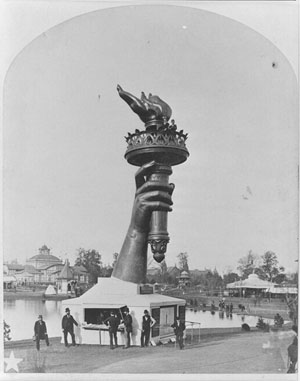 She has stood in all her splendour outside New York City, just south of Ellis Island, as the symbol of freedom for generations of Americans ever since…but is she really who she says she is?

The Great Imposter
Now, look at this picture: 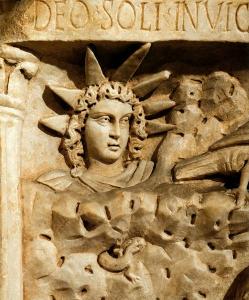 What or who do you see?

Well, it’s not what you think…say hello to Sol Invictus “the contriver of light”…or the giver of enlightenment. He was the official sun god of the later Roman empire.

The Sun of God
Sol Invictus literally translates as “The Invincible Sun”. A case can easily be mounted to show the entire story of Jesus, the Son of God, is a plagerised version of the story of this Sun God.

To take it a bit further, the grafting of Sol Invictus feast days to the tale of a boy born of a virgin in a manger in Bethlehem and visited by 3 kings are all part of a conspiracy to personify celestial events, but for what reason? These stories can be traced even further back than the golden age of Rome to 3000 B.C. to ancient Egypt’s story of Horus.

I have reason to believe that the story of Horus may have been borrowed from an advanced civilization that pre-dates known history…but that will have to wait for another post.

Toward the Rising Sun
Maybe that The Statue of Liberty faces toward the Winter time sunrise in New York (and toward Sunset Park in Brooklyn) is a clue meant for us to uncover her true identity?

The Truth
Should we add Liberty to the long list of solar gods? Or is she indeed the Sol Invictus for the New Rome? Perhaps this is all just a case of mistaken identity…?

Another interesting question would be what do the 7 points on her crown represent. Is it the light of liberty on the 7 seas and 7 continents as we’ve been told …or perhaps do they represent the 7 power centers (chakra) of the human body…and if so how does that relate to the power of the Sun?

8 thoughts on “Is This Liberty?”